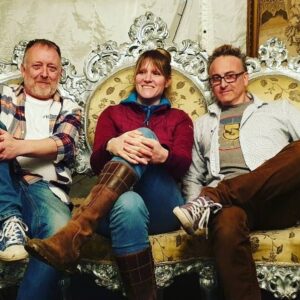 Banter are: Simon Care on melodeon, Nina Zella on keyboards and vocals and Tim Walker on drums, percussion, and brass. They are rooted in English traditional music but incorporate influences of pop, jazz, soul and big band sounds.
Although just three people, they create a huge sound and have been described as the world’s smallest big band.

“This album is brilliant. So good to hear this trio continue to evolve, still a top-notch ceilidh band but now a serious contender as a concert band. The arrangements have become more sophisticated, the playing tighter and the result is that if you didn’t know it was a trio, you wouldn’t believe it. The sound is greater than the sum of its parts.
Beautifully produced, played, recorded and mixed. A game changer.”
Saul Rose (Eliza Carthy and The Wayward Band)