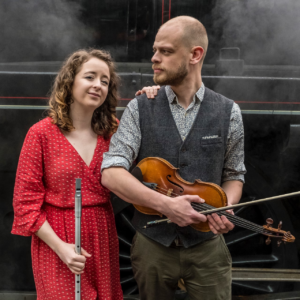 Chris Elliott & Caitlin Jones appear with Granny's Attic and Tom Moore & Archie Moss as part of the Friday night Festival Club. Tickets for this event are limited and only available to purchase when purchasing a ticket to another Friday Manchester Folk Festival event.

Described by Bright Young Folk as "experienced storytellers" who bring "timeless quality" to their music, Chris and Cait have been playing music together since they met in 2014. They have recently released their debut album, "Carry Me Home." Both proudly from Staffordshire, they bring a mix of traditional and self-penned ballads about place, identity, old and new.