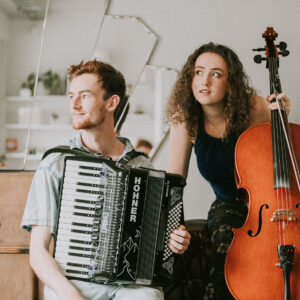 Good Habits appear with Mishra and The Brothers Gillespie as part of the Thursday Night Festival Club. Tickets for this event are limited and only available to purchase when purchasing a ticket to another Thursday Manchester Folk Festival event.

Good Habits are a UK alt-folk duo, telling stories and turning heads across the globe.
Composed of singer-cellist Bonnie Schwarz and accordionist Pete Shaw, Good Habits create folk-infused songs that test the limits of their traditional instruments. Sitting between folk and indie, their upbeat and interactive set guides the audiences through the chapters of their musical adventures, maintaining folk roots of musical storytelling amongst their energetic, virtuosic playing.

Covid-19 saw them 'stranded' in New Zealand whilst on tour. In the year since, Good Habits have performed alongside a line up of New Zealand’s top acts including Nadia Reid and Lost Tribe Aotearoa. The release of their debut album, ‘Going For Broke’, gained them shining reviews in Songlines, appearances in National Paper NZ Herald, and a tight tour schedule including performances at New Zealand’s largest festivals: Splore, TSB Festival of Lights, Resolution and many more.