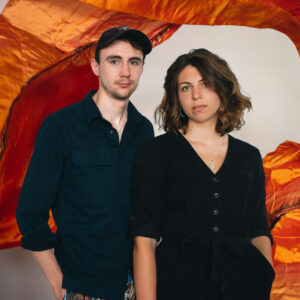 Mishra appear with Good Habits and The Brothers Gillespie as part of the Thursday Night Festival Club. Tickets for this event are limited and only available to purchase when purchasing a ticket to another Thursday Manchester Folk Festival event.

Mishra are a global folk collective with strong roots in U.K folk, out of which they weave a tight web of intricate, Indian-influenced original music that defies definition and has already brought awards recognition since their formation in 2017. Kate Griffin (The Magpies) and Ford Collier (BBC R2 Folk Award nominated The Drystones) are the songwriting partnership behind Mishra, drawing on their unique base of influences that encompasses folk music of the UK and America, Indian classical music, and soul to create a surprisingly accessible sound that audiences instantly connect to. Between the two of them, Kate and Ford create a rich texture from their array of instruments: Irish low whistle, banjo, Indian tabla, dobro, African calabash, and guitar, all of which provide a vibrant backdrop to Kate’s striking vocals. Their set is entirely original and traditional, apart from a popular cover of Gillian Welch’s Scarlet Town, receiving airplay on the BBC Radio 2 Folk Show by Mark Radcliffe.