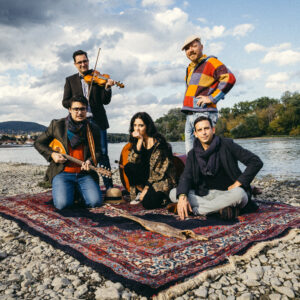 Ötödik évszak (Fifth season) play urban music with acoustic folk instrumentation. Their melodies evoke a melancholic, romantic picture of a city infused with the spirit of Hungarian folk heritage and the memory of French salons. Their music is born in an urban setting and pays respect to tradition, playfully combining these two worlds.

All band members are true contemporary masters of authentic folk music. Building on this foundation they open their music to improvisation and the unique world of French chansons.

Among the lyrics we find folk songs and poems of Hungarian and French poets in Hungarian in French alike.

This new formation founded in 2018 brings together five international musical carriers, decades of experience and years of friendly and familial ties. The band’s leader, Sándor CSOÓRI Jr. is an acknowledged composer, musician and performer, founding member of Buda Folk Band. His relationship to folk and world music dates back to before his birth, as his father is a founding member of the renowned folk music band Muzsikás. All members of the band are well-known figures of the Hungarian folk scene, their organic relationship to folk culture and folk music is widely known. They have proved their love for good music in a variety of formations (Lajkó Félix, Buda Folk Band, Dresch String Quartett, Hungarian State Folk Ensemble) and they regularly perform on the stages of Hungary, Europe and overseas.

Their honest, original and improvised acoustic urban music played on folk instruments targets Hungarian and international audiences who are looking for quality in folk music and creativity in its adaptation.